2. Combine the harissa, honey, olive oil and cinnamon in a small bowl, season with salt and pepper and mix well. Brush or rub the mixture over the cauliflower slices.

3. Drizzle a little oil into a large frying pan set over a medium heat. When the oil is hot, fry the cauliflower slices for 6–8 minutes on each side, or until they are cooked through and charred nicely on both sides. Blackening will occur as the spice paste is not only dark but also contains sugar (in the honey), which will burn naturally. This is part of the flavour of the dish and nothing to be worried about. (Alternatively, roast the cauliflower slices in a preheated oven, 220°C (200°C fan), Gas Mark 7, for 20–25 minutes.)

4. Meanwhile, mix the tahini with the yogurt and lemon juice in a bowl, season generously with salt, then stir in a little lukewarm water, 1 tablespoon at a time, until the mixture has a sauce-like consistency.

5. Transfer the cauliflower slices to serving plates. Drizzle over the yogurt sauce and any remaining marinade, then scatter over the preserved lemon slices, toasted almonds and parsley to serve.

Tip:
To make this a vegan recipe, substitute coconut or soya yogurt for the Greek yogurt. 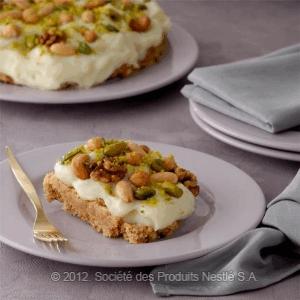